Dissolved oxygen (DO) means the amount of oxygen that is dissolved in the water. Oxygen is the essential element to all animals. No animals can survive without it. Dissolved oxygen in water makes aquatic life possible. Human being takes oxygen from the air with the lungs. On the other hand, Fishes take dissolved oxygen through their gills. Gills work better if the water contains more oxygen. Hence to growth and reproduction of aquatic life must have sufficient levels of dissolved oxygen (DO) in the water. Otherwise, it becomes harder for animals to get the oxygen. It is not visible to us. Moreover it is not the oxygen component of the water molecule H2O. It is express as milligrams per liter (mg/L) or ppm.

Higher DO level can increases the taste of drinking water. So many water companies try to keep higher dissolved oxygen in water. In the case industries dissolved oxygen is not good sign, it may corrosion the water pipes. It is also corrosive to boiler.

Oxygen enters into the water by following ways (1) direct absorption from the atmosphere, (2) rapid movement, or (3) release of oxygen from aquatic plants during photosynthesis.

Photosynthesis: in presence of light and chlorophyll green plants and some bacteria produce Oxygen and glucose by using carbon-di-oxide and water. It is recognized as Photosynthesis process.

Moving water such as mountain stream or river is greatly contact with atmospheric air. Therefore they are able to mix with air that tends to dissolve more oxygen. On the other hand stagnant water contains less dissolved oxygen.

The solubility range of oxygen is about 5-14 ppm. Sufficient amount of dissolved oxygen is important to all forms of aquatic life. If the levels drop below 5.0 ppm then it would stress to aquatic life. Lower concentrations cause greater stress. If the oxygen levels go to below 1-2 ppm then large amount of fish may die. On the other hand 8-9 ppm is generally good fishing waters to support a large diverse fish population. Most aquatic animals cannot live in the areas where the dissolved oxygen level is less than 0.2 ppm. This is anoxic. Moreover, it will increase the solubility of many toxic elements such as lead, zinc, copper, hydrogen sulfide, ammonia, cyanide. In addition it can also alter the structure and diversity of aquatic communities. Although too much dissolved oxygen concentrations is a very rare but it may creates gas bubble disease of fish.

You can measure Dissolved Oxygen in different ways. Electronic meter is one of the important methods. It does not measure oxygen directly, it measure the partial pressure of oxygen in the water. Then it would convert to oxygen mass weight concentration. The BOD is another significant method. It determines the oxygen requirements during a specified period of organic matter degradation. The other methods are drop bottle (iodometric), a microburet, or a digital titrator. The amount of oxygen dissolved in water is often expressed as ppm or mg/l. 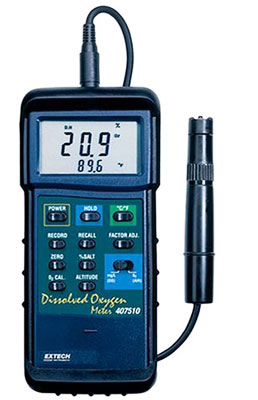 There is a significant relationship between water temperature and DO concentrations. Oxygen easily dissolves in cool water. Cold water can holds more dissolved oxygen than warmer water. Moreover the solubility of oxygen in water decreases with the increases of temperature.

Seasonal changes is the another factor that affecting dissolved oxygen concentrations in water. During summer season the water becomes warmer. Therefore at this time water contains less DO. Conversely the water becomes cooler at the time of winter season. So this time the water holds more oxygen. Rainy seasons also effects on oxygen concentrations. As the rain water interact with the atmospheric oxygen then it tends to higher the dissolved oxygen level.

Waters with high amounts of salt holds less oxygen than fresh water. Reason, the solubility of oxygen decreases if the salinity of the water increases. Hence the freshwater like lakes, streams, and tap water generally contains higher concentrations of DO than the ocean. Higher suspended solids in the water also decrease the DO.

The ocean, rivers and streams water are moving water. When this water is moving then they contact with air. Oxygen concentrations are much higher in air than in water, which are about 21% and 5-14 mg/l respectively. This huge difference of concentrations helps to dissolve the oxygen into the water. Moreover the volume and speed of moving water can also affect on dissolved oxygen levels.

The water may contain a lot of organic waste including leaves, grass, dead plants or animals, organic chemicals and sewage. Microorganisms like Bacteria decompose these materials by taking up oxygen. Therefore the levels of dissolved oxygen drop in the water body.

Fertilizer runoff from farm fields and lawns may decrease The DO. As like land plants the aquatic plants also grow better with these nutrients. These large amounts of nutrients such as nitrate and phosphate help to produce great quantities of algae. When these aquatic plants die, then the bacteria decompose them by using large amounts of DO. This process is known as eutrophication. As a result Dissolved Oxygen levels can drop too low.