The substances that have ability to dissolve other materials are known as solvent. It can be liquid, gas or solid. Water has excellent solvent properties. It can dissolve a vast amount of substances. Therefore it is called universal solvent. The polar effect (dipole moment) and high dielectric constant properties make the water excellent solvent. It plays an important rule to the entire living thing on the earth. Whenever the water goes to our body, it takes valuable chemicals, minerals and nutrients.

The water has two different atoms such as oxygen and hydrogen. The oxygen is an electronegative atom whereas the hydrogen is an electropositive atom. Therefore the bonding electrons of the O-H bonds spend more time near to the oxygen atom. Consequently it has an asymmetric internal distribution of charge although they are neutral and uncharged. This creates partially positive charges on hydrogen and partially negative charge on the oxygen. The partial positive and partial negative charges on water molecule can be shown in following way:

This polar property of the water can form electrostatic interactions with other polar molecules and ions. Therefore water can interacts with different charged and polar substances but does not react with nonpolar substances like oils. The positive ions or partially positive charged molecule of a substance feel attraction with the partially negative charged oxygen atom. On the other hand the negative ions or partially negative charged atom of a substance feel attraction with the partially positive charged hydrogen atoms. This is called ion-dipole or dipole-dipole force of attraction. This force of attraction between the water molecules and ions or partially charged molecules is lead to the formation of a three-dimensional hydrated ions, or hydration shell which is lower in energy compare to separated ions or molecules. These hydration shells allow particles to spread out evenly in water. The partially charged water molecule does not remain fixed with a single ions or a molecule which is changed with time to time. So the average number of close water molecules with an ion is called hydration number of that ion. Normally the hydration number of a cation is larger than an anion. On the other hand small and highly charged ions have larger hydration number. 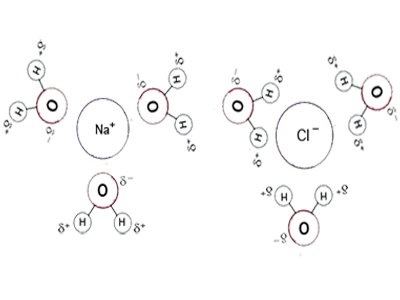